Skip to Main Content
It looks like you're using Internet Explorer 11 or older. This website works best with modern browsers such as the latest versions of Chrome, Firefox, Safari, and Edge. If you continue with this browser, you may see unexpected results.

This guide serves as an introduction to the functions within the Bloomberg Terminal that help to determine the value of the company using relative valuation principles.

1) Relative valuation against itself - how has the company earnings, P/E, ROE, market cap and operating margin changed over time.

2) Relative valuation against other companies that are in the same industry or region.

Relative valuation against itself

I will continue with using as an example the Coca-Cola. I want to analyze how has the company been doing over the past five years. Therefore, the first step is to look at the share price. 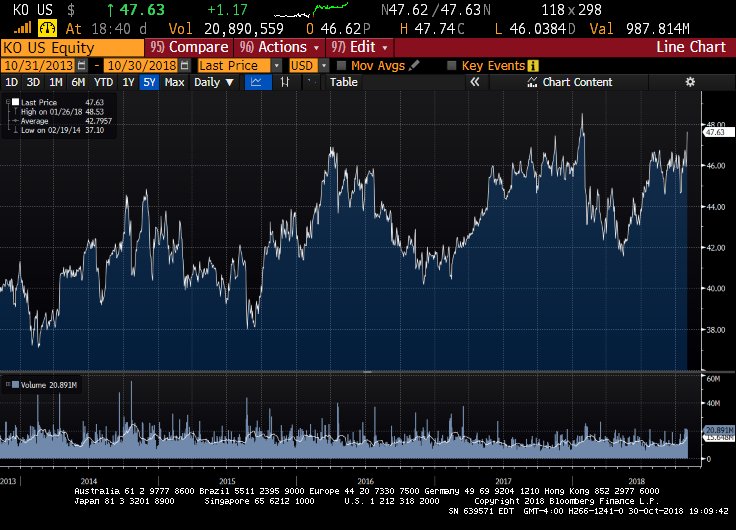 The share price increased from 40 USD to over 47 USD in last five years with little ups and downs along the way. This means that in the P/E ratio formula, the P went up. However, just from the share price we cannot determine how were the earnings and thus the P/E ratio affected overall. For that, view Coca-Cola US Equity, then open up P/E Bands & Valuation function by first typing  typing PEBD in to the command line. In the time horizon, click on 5Y to display P/E bands for the last five years.

The white line is the Coca-Cola share price. The colored lines show given level of P/E to its respective share price over the years. Now you can see what the share price of Coca-Cola would have been, if the P/E was fixed to a given value, such as 17.9 or 25.5. The chart is moving in steps because it calculates with a given P/E over full year's earnings per share. 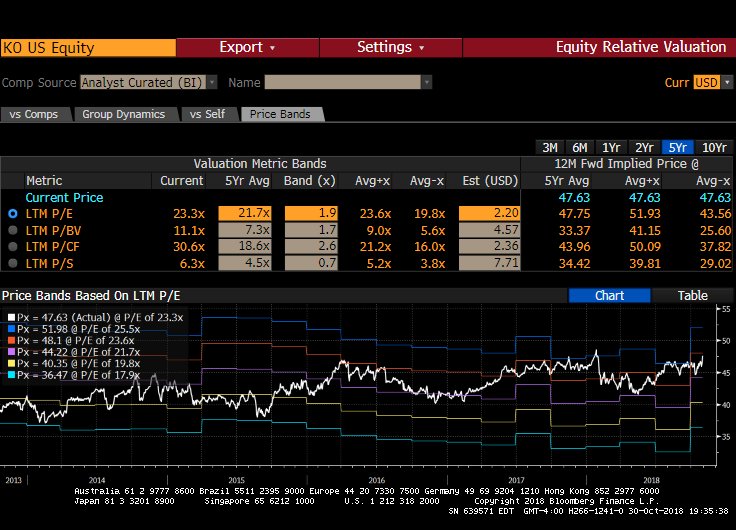 Next is measuring P/E ratio and growth rates against peer group that is companies that operate within same industry or area. This helps us to determine whether Coca-Cola is currently being traded at a premium or discount relative to its competitors.

The biggest difficulty is finding a company that can be considered its competitor. When looking at Coca-Cola, we can determine that they operate in a soft drinks industry but what good companies to compare to? Heineken is like Coca-Cola big, international enterprise that has a wide range of soft beverages for global market but they also sell alcohol. This can be a problem because share price and P/E of Heineken could go down if their beer division would perform poorly even though their soft drinks department would do well or the other way around. Similarly, Nestlé and Danone operate in the soft drinks industry but they also have big division that are involved with selling food and cannot be used as a perfect competitors to measure growth of Coca-Cola. This is also problem with Asahi and Kirin holdings that are big enterprises but operate mostly in Asia so cannot be effectively used for comparison to a company that has important source of revenue from US and Europe.

You can get an overview of all competitors by opening Coca-Cola US Equity and then typing RV into the command line. This will open up a table of comparables. From here we can get insight into valuation of Coca-Cola in comparison to other companies operating in the same industry. 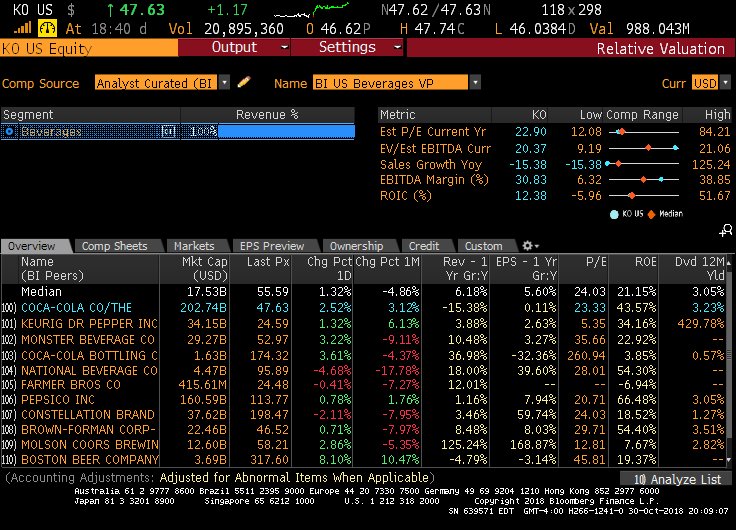 You can go through different tabs and compare companies based on ownership, market return, Earnings Per Share preview, and other. Most important are these three columns: 1 year change in Revenue, 1 years change in EPS, and P/E. You can see that the current P/E of Coca-Cola is 23,33, slightly under the median of 24,03. Earnings per share remained almost the same (positive 0,11%), even though the revenue has decreased by 15,38%.

Then open up Relative Valuation Correlation function by typing RVC into the command line. This helps to visualize the data by creating a bubble chart and plotting EPS growth in 12 months on the y-axis against expected sales growth in 12 months on the x-axis. The bubble size reflects the market capitalization of each company. You can change what is displayed on x or y-axis by clicking on the button and selecting desired metrics. 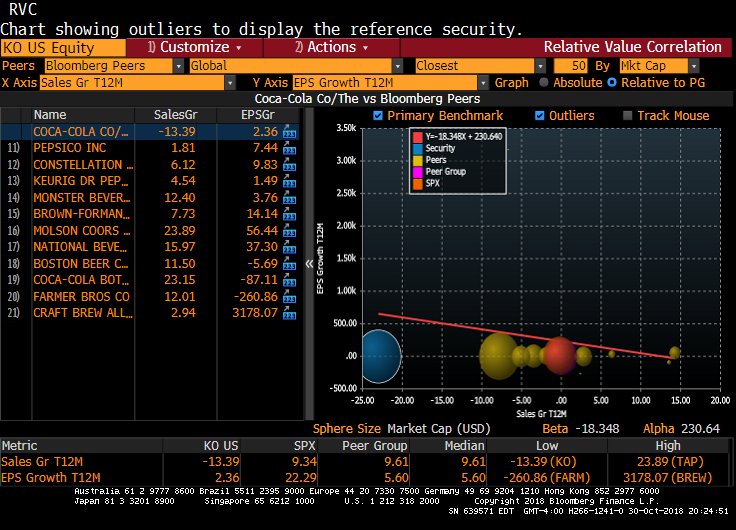 With these functions, you can analyze valuation of a company relative to its competitors. This should provide you with information on the company. However, it has a drawback as it assumes that the whole industry is fairly valued. If all of the companies are overvalued or undervalued, the picture can be blurred and there is a possibility for a sudden share price spike or fall even though it seems to have an average P/E.

You can also compare one company to another by using Graph Fundamentals. We will compare P/E ratio and market cap of Coca-Cola to PepsiCo. Open Coca-Cola US Equity, then type GF into the command line. Then add security PEP US Equity and for fields select Current Market Cap and Current Price to Earnings Ratio. Then select 5Y period and chart layout panel per security. 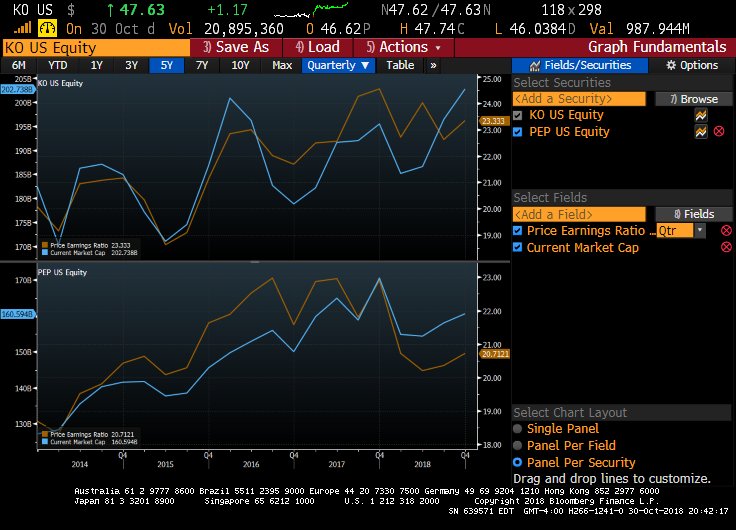 Now we can compare how did Coca-Cola do relative to Pepsi Corporation.

We can compare the valuation of a company to the overall market the company operates in. Open up World Equity Index function by typing WEI into the command line. Now we get an overview of all world markets. As we are looking at Coca-Cola, the most relevant will be those in Americas. Take a look at the S&P 500 which is one of the main equity indices in US. It is based on the market capitalization of 500 largest corporations being listed either at NYSE or NASDAQ stock exchange. 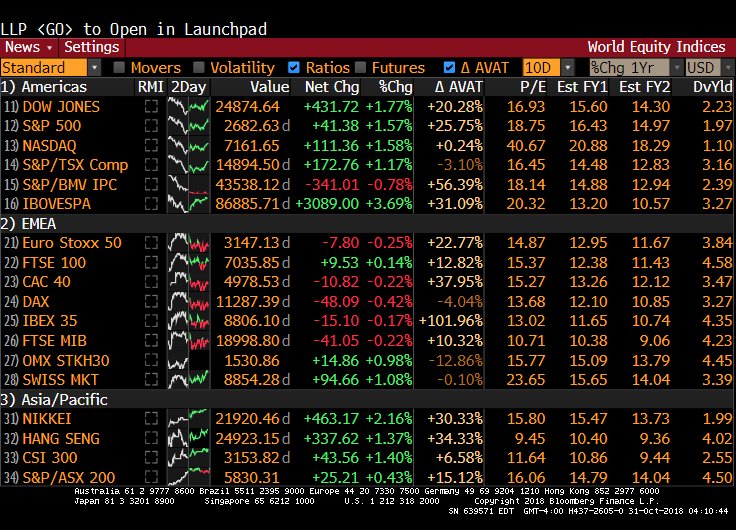 Now we can compare information and data from market to the single equity. Open up Coca-Cola US Equity and type DES into the command line to open security description. 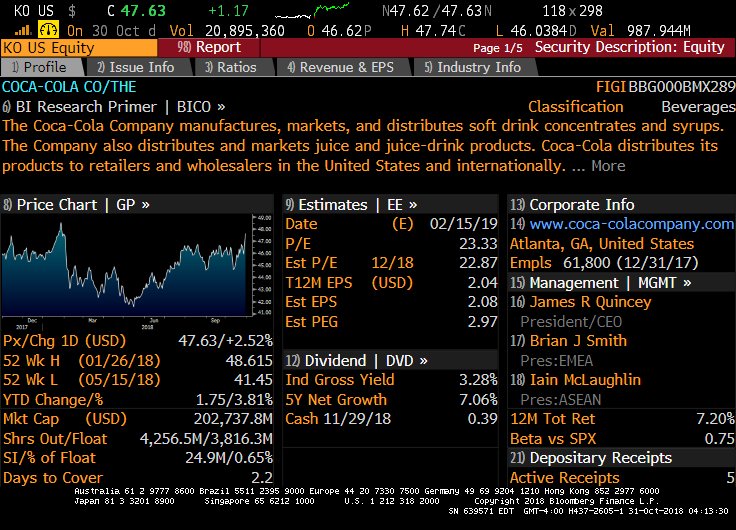 Now we can see that in the security description the P/E of Coca-Cola is 23,33 compared to 18,75 of S&P 500. However the dividend yield of S&P index is lower, just 1,97% in comparison to 3,28% of Cola. You can get other overview by clicking relevant checkboxes, such as data about volatility or futures.

You can also chart Coca-Cola, or any other company that you will be researching, against relevant market index. In this case, open up Coca-Cola US Equity then type GF into the command line. Type SPX Index in add security tab and for fields select market cap then select Single Panel chart layout. Now you can see that the Coca-Cola went hand in hand in valuation with the S&P 500 index except for a spike in 2016.